beat 1-3 with this
barely anyway 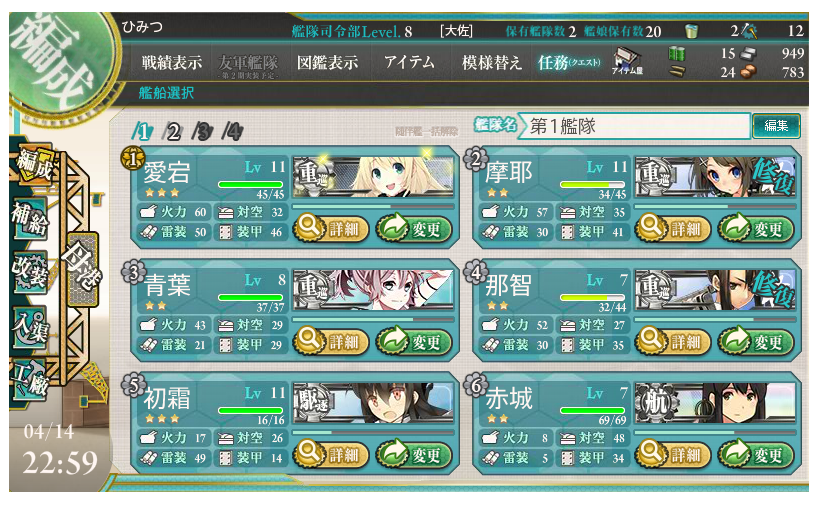 You can switch heavy to light cruiser if is you are running low on ammo. Generally the stronger the ships the more fuel and ammo they require per sortie.

I see that you got Akagi, There are mainly 3 types of plane for CV. Green, mainly used to gain aerial superiority over the enemy. Blue, mainly used to bomb heavy armored ship but dmg is inconsistent. Red, mainly for consistent bombing dmg. When you resupply CV they use alu resources as well not just fuel and ammo.

And you probably won't get submarine until after awhile, but they basically have low armor and hp, but they have the special property of drawing all enemy DD and CL fire to them, so in a sense they are like "tanks".

Couple ships they you might want to play with around first:
Kitakami, Mogami, Isuzu. All 3 can be upgrade to Kai at low level and Isuzu offers radar equip which can be harder to obtain. Kitakami upgrades to CLT and Mogami upgrade to CAV.

Chitose and her Sister Chiyoda, they can actually be upgraded 5 time OAO! However, they are super weak at first, but they do offer Type-A Torpedo equip which can be equipped to CLTs. Ships with Type-A will fire torpedo once in opening phase before the actual bombing phase.

Aside from that, make sure to use your 2nd fleet to slowly unlock the expeditions, they will eventually become your main method of getting resources Expedition 5 is a good one to farm at low level and Expedition 2 is a good one to farm Repair Bucket with. Make sure to use wiki to check the expedition requirement for success so you won't be wasting your time.

Also do note that some later maps does require specific fleet combinations like Map 3-2 (one of the walls...) that require you to use 6 DDs, so you want at least 2 of each ship types. (And you can't use 2 of the same ship in the same fleet).

I also recommend unlock the 3rd and 4th repair dock because it help greatly speeding repair process up...(Akagi can easily get up to 3hr+ repair time =3=/) but that cost $ so... is up to ppl. 
Armelle wrote:beat 1-3 with this
barely anyway

You actually progessed faster than Lyr, though... that lucky bum crafted Shimakaze, Yukikaze and I-8 all today <_< . . .

did i do good 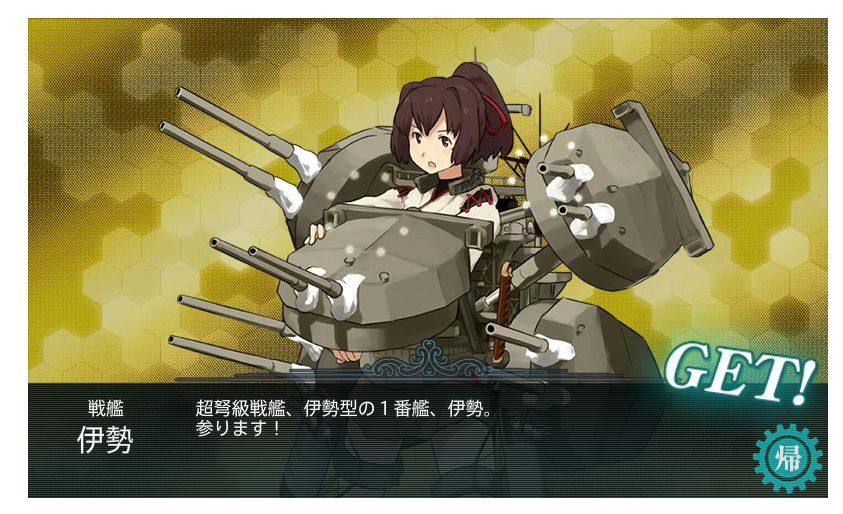 Armelle wrote:did i do good

O nice, you got ur first battleship, they upgrade to Kai at a pretty early stage too 2x I recall and they become BBV, which is a good combination for 1-5 farming.

she kai's at 10
the question is do i actually want to make her an aviation ship???

Armelle wrote:she kai's at 10
the question is do i actually want to make her an aviation ship???

Sure... why not =w=/? There is only 4 BBVs too I think.
They get to carry bombing seaplane (which means you can attack subs, though very weak dmg) and aviation property in navigating maps but still retain the BB ability too.
But you can wait until later to Kai ships, because usually they increase fuel and ammo consumption. Also when ship get upgraded their damage are instant repaired and moral is back to default so you can grind them a bit more until you Kai (just don't sink them). One last thing to note is that modernization is reduced to 0s when you Kai.

I actually crafted my first Ise because they weren't dropping for me(though I got a lot Kongo Class drops...), I must remembered wrong on the Kai then, it must be Fusou sisters.

And 2-2's boss node has Kaga as rare drop, if you do get there you might want to grind there a bit, since Kaga has the most carrying capacity for CV.

also ive been trying to use destroyers but they aren't really destroying much of anything
not really sure what im doing wrong...are they really only good at night and torpedo phase?

also, i might be focusing on mai waifu too much 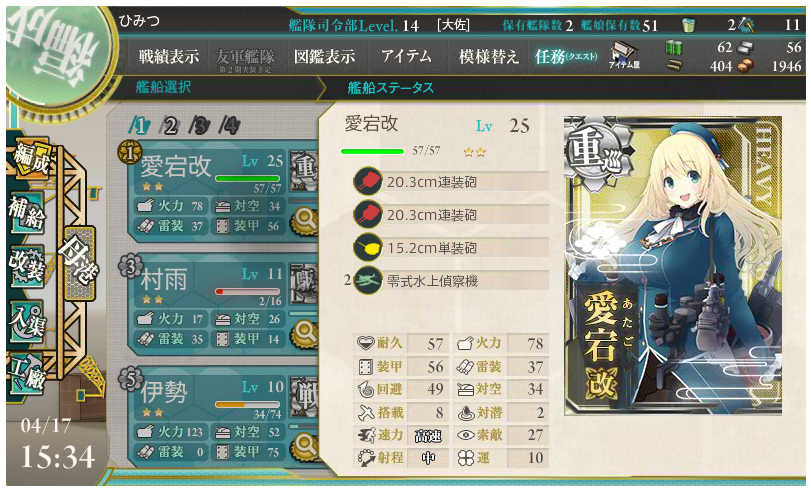 Armelle wrote:also ive been trying to use destroyers but they aren't really destroying much of anything
not really sure what im doing wrong...are they really only good at night and torpedo phase?

XD yes, that's what DD is good for really, on day time they are pretty useless. Another thing DD can be used for is anti-submarine maps. Only DD and CL can really do anti-subs. Bombing seaplanes can get them but they barely do any dmg to elite classes. Generally for DD ppl equip Main cannon (Red) Torpedo (Blue) Main cannon (Red) on the 3 slots for night time torpedo cut-ins.

The first slot of a fleet is the flagship slot, it will net more exp than the other ships, so if you want to level another ship you can also move the ship to the first spot (1st fleet flag ship is also the Secretary Ship at the HQ). Another things is try to allow the ship you want to level get MVP (Basically who does the most dmg in battle), to do this you kinda have to play with the fleet combination and what not and play the the equips setup. For example if you have a fleet of 6 CA then u can give the one you want to level 20.4 cannon while the other ships 14 cannon so that ship have power to do more dmg. But yes, usually is easier to level CA, BB, CV compare to DDs because they are weak. Another thing is you do not need to run the full map to level, there's couple maps that the first node is good for farming and simply return to base after the 1st node battle.

For DDs you can run 1-5 to level up some of your DDs (most of them Kai at level 20), 1-5's first 3 node is are all submarine, just make sure you use horizontal formation can continue grind the first node. Also note that 1-5 is one of the map that scale up with your base level, so when u go above 40s you might start to want to have some anti-submarine equips, you can look on wiki for the formula, but be warned most the time crafting equips will result in failures.

I would not be worry too much as long as you do raise all type of ships, you really don't need DD until map 3-2, which is one of the walls in the maps, but before that you have to deal with the gruesome 2-4, I don't think Lyr passed that yet.

And yea, this where you start to get to the strategy parts of the game of setting up fleets and equips for easy route to push pass maps.

This is also a nice time to talk about the boss meter maps.

On later maps and event maps, there will be a gauge next to the map The meter basically symbolize the boss HP, each time you enter boss node and do dmg, the meter will reduce. When you completely reduce the bar, you clear the map. There is a catch however, to reduce it to 0 you have the sink the Boss Flagship or the bar will remain at 1 HP.

For map 1-5 here the basic set up for me is BBV, CVL, CL, CL (You can use DD too for CL). The BBV here allow 2 turn attack so better chance to clear the sub, and the rest of the setup is basically to reach boss node (When u reach around level 40s you can start farming some submarines here).
Equip wise, something like this:
Basically all Torpedo Planes And for DDs, you can try to modernize them so they have a bit more armor and stats, this is my Inazuma, I started with her =3=/ (though maybe should have picked Fubuki... she was kinda hard to get for me at first...) when the stats is maxed you can see the colored boarder. The Stars indicate how close you are close to maxed stats. But as you can see, it is still no match for Battleship Classes:
Kongo-desu, my first Kai Ni ship =M= (basically used Kongo 4 + Akagi + Kaga for most cases =D) (Yamato Hotel... 1 sortie from her can easily equal to 6 ship going out at once... and watch ur ammo go straight down down down... and that's not even mentioning when she get dmg'd) And to illustrate the previous point on Kaga: Each slot for a CV is a fixed amount of plane they can carry. In general, you want to have as much as Figher Plane as you need to achieve aerial advantage (or you just choose give up and switch to focus on night battle, in which case you'd have DDs instead. P.S. CVs don't attack at night and cannot attack when reach medium dmg). Then you carry as much as Torpedo Plane to sink enemy ship.